April 17, 2020
Falafel: the ultimate gluten-free, vegan, healthy, delicious food.  Practically a complete food unto itself with protein, carbs, and healthy fats, and vegetables all in a small delicious package.  But sadly, in the USA, they are often not made gluten-free when they so easily could be. 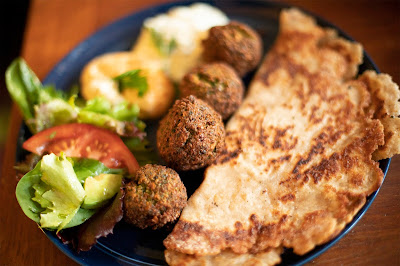 I was traveling in Granada, Spain a few years ago when my then-fiancé and I were looking for a good, inexpensive meal that was a change from Spanish food.  We found a Lebanese restaurant and really lucked out - their falafel was gluten-free!  It turns out that falafel is usually gluten-free outside of the US.  But more than that, it was the most delicious falafel I've ever tasted.  It was kind of smooth and creamy on the inside, and very, very green as well.  The outside was the ultimate crispy crust.

Recently I decided to re-create that falafel experience.  I was partly motivated because I recently got a Delonghi Deep Fryer.  Deep frying the falafel is what gives it the super-crispy crust.  However, you can also bake or pan-fry the falafel.  Packing the falafel with flavor involves just quadrupling the amount of greens that you put in them, according to most recipes.  I also omit the baking soda that most people use, as that makes them fluffy not creamy.

Thanks to Downshiftology for the recipe inspiration!

The night before you want to cook your falafel, soak in a bowl with plenty of water topping it: 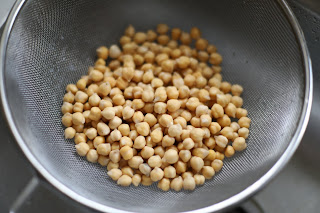 
Note: if you must use canned chickpeas, then you must bake them.  They fall apart frying, as I learned the hard way.  The texture isn't as good, but the flavor is still great when using canned chickpeas.

An hour or more before you want to eat (leave extra time if you are baking), drain the chickpeas and rinse.  Put in a food processor with: 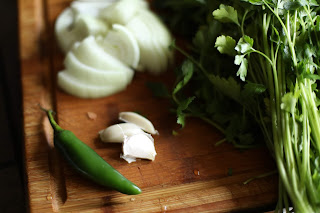 
Pulse the ingredients together a few times until the garbanzo beans start breaking down and everything is blending a bit.  Add 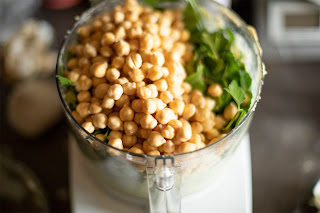 Pulse all the ingredients together until the garbanzo beans resemble coarse sand.  Scrape down the sides of the bowl as necessary.

Remove the mixture to a bowl and refrigerate for at least 30 minutes.  Pre-heat your fryer or oven. Cook times vary depending on method: 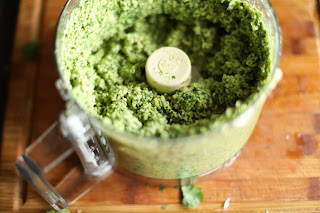 With your hands or a scoop, carefully form balls of the falafel mixture, anywhere from golf-ball sized to nectarine sized.  Somewhere in between is typical, about 16 total falafels. Make patties if you are baking.

Whichever cooking method you are using, turn them over once mid-way through the cooking process.

Fry in batches of four for two minutes, then turn over and fry for another 1-2 minutes until golden brown to deep brown.

For fryers, you may want to test a single falafel to make sure it will hold together before doing a batch.  If the balls aren't holding together when you form them, or if your test falafel breaks while cooking, you can stir into the mixture: 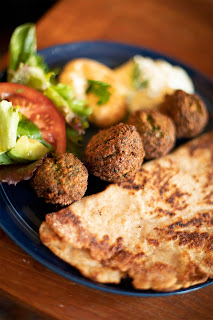 I typically don't find this necessary, but sometimes my falafel split a little.  I don't mind this.

Brush generously on both sides with:

Remove the falafel from the fryer or oven and serve immediately while hot, or save in a 200° oven until ready to serve.

Serve with hummus, salad, tzatziki, and pita or, my favorite, gluten-free naan.

sianifairy said…
I've made your falafel twice in the last two weeks. First was with chickpeas, and the second time...with soaked yellow split peas. We were gifted about 8 lbs of them and falafel is way sexier than split-pea soup. With garden lettuce, your naan, and tahini sauce, just delicious both ways.
June 18, 2020 at 1:52 PM 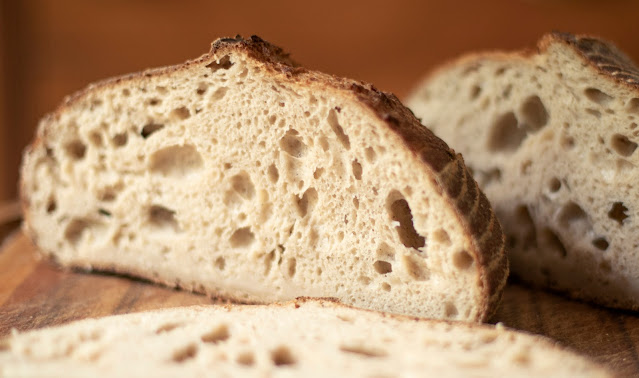 I gave up on producing a showy loaf a long time ago.  I always rolled my eyes a little when I saw photos online of perfect bloom or wide-open crumb.  "The mustard is going to just fall right through," I would think to my self disapprovingly, shaking my head a little. It turns out, I was just jealous. After a decade of gluten-free bread baking and recipe development, and through a collaboration with some other bakers, I've come up with a gf sourdough bread recipe that produces an open crumb, a large bloom, and sometimes, if I'm lucky, an ear.   The bread has a very mild, pleasant sourdough flavor and is very light in color. The crumb is very open but not too delicate.  It has a chewiness to the texture that I associate with a good sourdough bread.  The crust gets a nice browning and it toasts up nicely. And I don't mind the mustard falling through as much as I thought I would. Many thanks to Michael Hollesen who came up with the original version of this recipe.  We
Read more 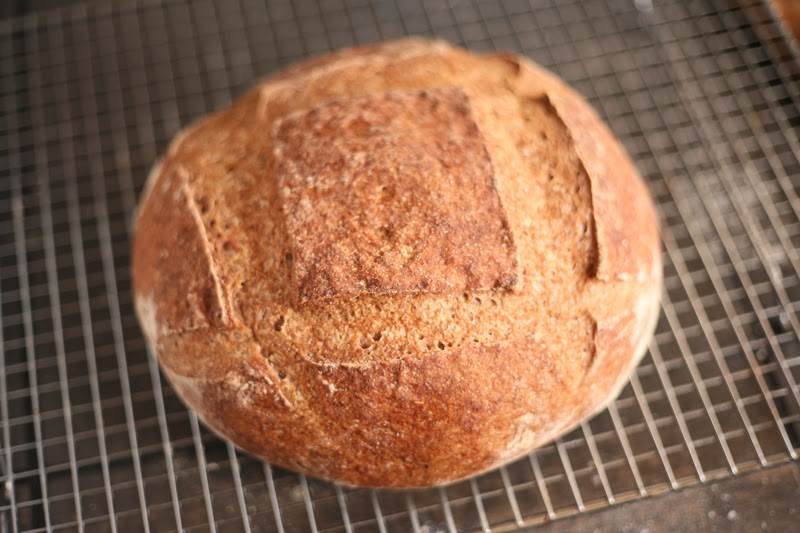 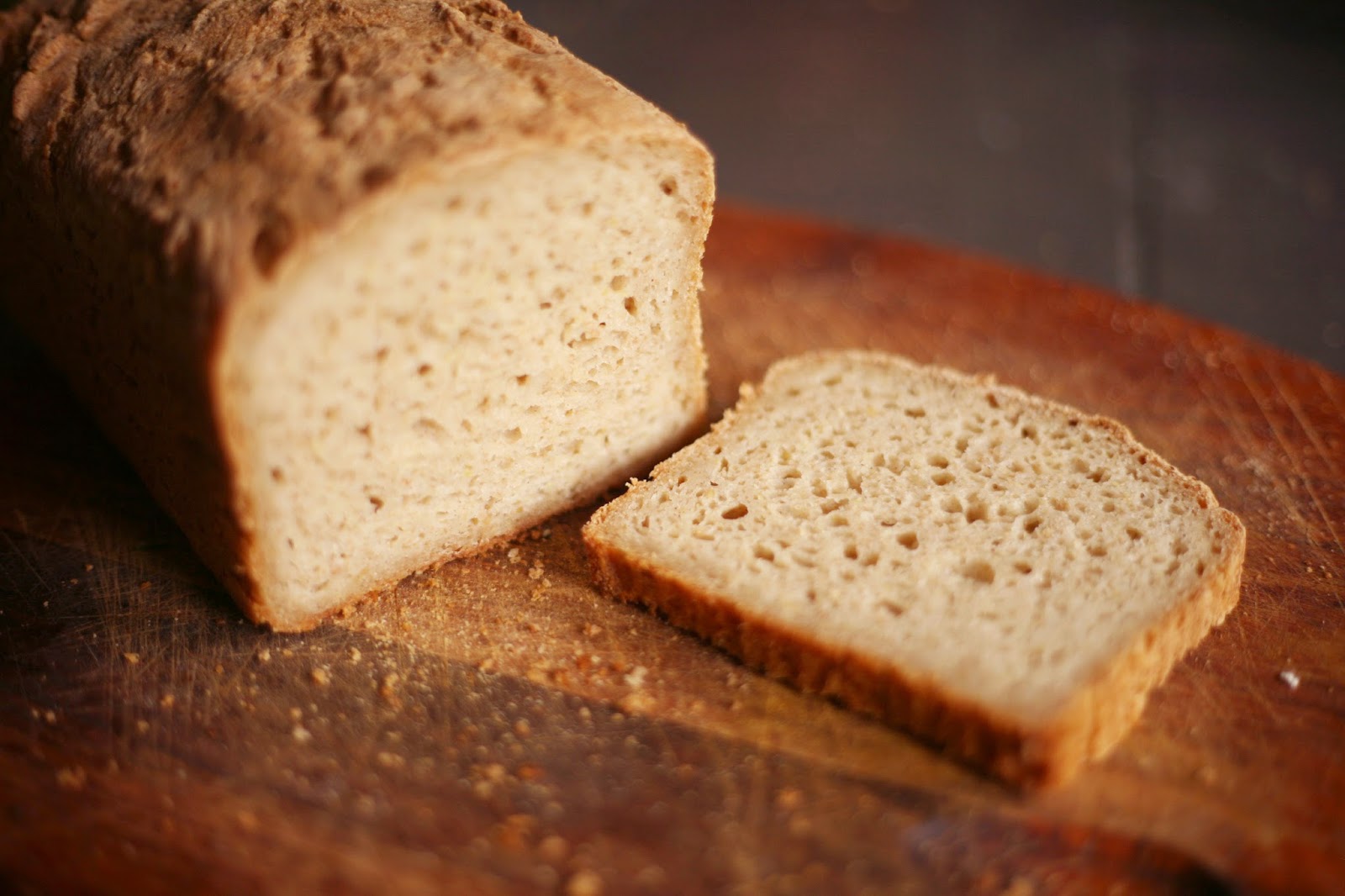 I have been working to provide my readers and customers with some flour blend recipes so they can enjoy high-quality, home-cooked, gluten-free baked goods.  I have been trying to come up with some flour blends that are easy to make, take few ingredients, and are delicious as well. Find recipes in the Bread Tab .  It's easy to multiply the recipe to make a big batch if you measure by weight. This blend has a high concentration of whole grains.  If you would like a whiter flour, you can use these same ingredients to make my  Rustic White Bread Flour Blend .   Or, of course, you can  make your own bread blend! I use Bob's Red Mill gluten-free flours for my breads.  They are easy to find here in Portland, Oregon.  However, I chose this group of flours because they should be easy to find and inexpensive in many parts of the world.  If you try this blend with other brands of flour, please let me know how it works for you! Easy Gluten-free Bread Flour Blend Makes 450
Read more 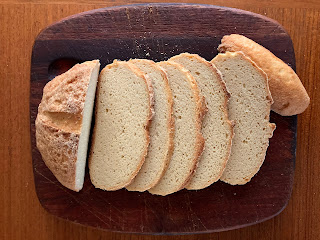 It's one of the first things you learn when you start trying to bake gluten-free: use a blend of different flours.  No single flour can work.  Especially for bread. I based all my baking on this principle for years.  More like 1.5 decades.  Then this year, for the very first time, I asked myself: why?  And to single flours: why not?  Thus were born many, many little baby loaves of single flour gf bread. No surprise that it didn't work for everything.  Glutinous rice flour? No way. The surprise was that it did work for almost  everything. 100% Cassava flour.   100% Oat flour. 100% White rice flour.   100% Brown rice flour. 100% Buckwheat flour. Then, the other surprise that shouldn't have been a surprise.  My favored grains were the best of the bunch. 100% Teff flour (this one is sourdough, the rest are yeasted). 100% Sorghum flour.   100% Millet flour. There is a method to my madness.  This whole experiment was made possible courtesy of psyllium husk.  It's my not-so-s
Read more 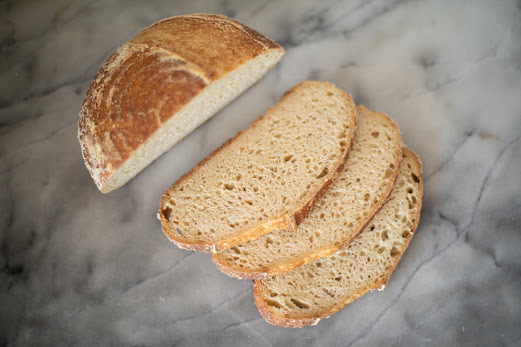 This bread came out exactly how I wanted it to: a caramelized, crisp, thin crust, a soft, open crumb with thin cell walls, and a light golden color that makes you think of butter.  I've been working toward this bread a long time but it was really so simple.  Just a few of the best flours blended just so, some sourdough starter at its peak, psyllium and salt.  I added a little sugar for a better rise and a darker crust.   I gave a piece of this bread to my husband to taste, and he said, "This is good.  It has a good mouth feel and good flavor.  It tastes like bread."  My husband eats gluten so that's a high compliment.   This recipe is one of the simplest gluten-free sourdough recipes because it only calls for three flours: ivory teff, millet, and tapioca starch.  It's also the fastest and easiest sourdough recipe I have created, and you can make it same day.  It is not a sour loaf, but instead has a lot of complex yeast flavors.  It has a light color and texture e
Read more 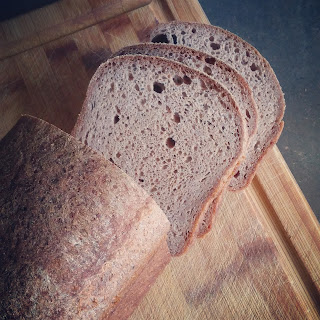 Years ago I posted the very popular Best Teff Sandwich Recipe.   That recipe uses xanthan gum and eggs, which some people can't do.  Here I have developed a recipe that's xanthan gum free, egg-free, and vegan.  Check out the Artisan Teff Bread Recipe if you'd like to use my bread flour blend . Vegan Teff Sandwich Bread Recipe Mix time: 10 minutes Rise time: 1.5-2 hours Bake time: 45-55 minutes In a medium bowl, mix together: 200g (1 1/4C) teff flour 100g (3/4 C) sorghum flour 75g (1/2 C) tapioca flour 75g (1/2 C) potato starch 24g (2 Tbsp) sugar 6g (1 tsp.) salt Set this mixture aside and in a large mixing bowl or the bowl of your stand mixer whisk together: 520g (2 1/3 C) warm water 30g (1/3 C) whole psyllium husk 2g (1 tsp.) yeast Set aside 50g (1/2 C) of the flour mixture and put the rest of the dry ingredients in the bowl with the wet ingredients.  Blend with a paddle or dough hook on your stand mixer, or blend with a wooden spoon, until the
Read more